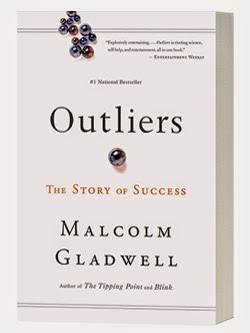 For those who have thought "if only this or that happened, my life would be different" this book is for you.  Malcolm Gladwell starts with the proposal that our lives are influenced by when we were born and then gives examples that make the one point and expand to other influences over which we have no control.

It appears that people born in about a 3 months calendar span are inordinately represented in the highest levels of hockey, at least in North America.  Turns out that the youngest levels of the sport start a somewhat inadvertent winnowing process by allowing kids of a certain age who have reached that age by a certain time to play organized hockey.  Those who are the oldest in that segment are naturally a little bigger, stronger, faster and more mature.  In turn, those kids catch the eye of coaches who select all star teams and those who will receive added instruction over the year.  This trend continues throughout the player's formative years, resulting in a distinct advantage based solely on birth date.  If the selection process were to happen multiple times a year, with shifting cutoff dates and multiple additional training camps throughout the year, that advantage should disappear, which is the case in countries with a different training process.

Another trait is the number of hours a person practices their sport, art, or other activity.  For those at the highest achievement levels of pretty much everything, they need to devote 10,000 hours of focus on that activity.  They don't have to start out with the most aptitude, although some level of ability is needed, but the key is getting to that milestone.  Gladwell gives enough examples in diverse fields to make a compelling argument.

Finally, when you were born over the years can have a huge impact on success.  Those who become giants of industry, the arts, science, etc. could be just another practitioner forgotten by time by being born as little as 3 to 5 years either side of their actual birth date.

He finishes the book by looking at his own life, going back over generations and the chance occurrence of factors that allowed for one outcome over another.  For anyone who has had some amount of success in their lives, especially if its at the very highest level, thinking over these factors over which a person has no control should engender every increasing amounts of gratitude and decreasing amounts of pride.