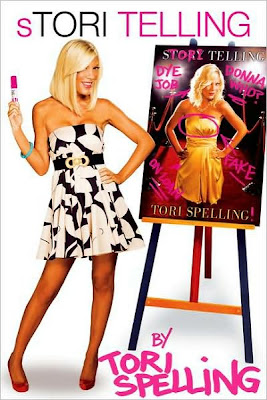 Most everyone who reads this review (hell, everyone) will undoubtedly lose most of whatever respect they had for me. But I don't care. That's right, people - I bought AND read Stori Telling by Tori Spelling. Soak it up. Breath it in. You're related to me.
Why did I pick up this book, you ask? A few reasons. One, it's summertime and dammit, I wanted something to read at the beach. Forget the fact that I read this on a sunny, hot Hoboken day laying on my leather couch for 7 hours until I finished it. Forget all of that. Forget the fact that I called several Barnes and Nobles (and, admittedly, a few Border's) to see if anyone had a copy. Sure, maybe it should've made me a bit embarrassed that this book was sold out everywhere (meaning that "the masses" were picking it up, and that usually isn't good). But I was shameless. I called everywhere saying "Do you have Stori Telling by Tori Spelling?" trying to sound as intelligent and worldly as I am while also really hoping they would put it on hold for me.
Second? I was curious. Maybe it stemmed from getting sucked into a marathon of her reality show on the Oxygen network "Tori and Dean." Maybe it is because I grew up watching her on 90210. Maybe it was because I always kinda thought she was an idiot and spoiled and entitled and annoying, and then when I watched that stupid marathon thought "Wait, she's kinda funny." Who cares. I bought it, and that's that.
So. The review? Well, none of you will read it, I'm sure, and that's just fine. I proudly have it displayed right up there with "The Bell Jar" and "Anna Karinina" and "Memoirs of a Geisha." Well, maybe not proudly, but it's there. And I am going to stick by this purchase because it was funny. And light. And a quick read. And it didn't make me curl up into the fetal position and contemplate the best ways to take your life. And I'm a firm believer that not every book has to change my life. Sure, it'd help if I learned something from it, but does it count that I learned that Tori Spelling only had one nose job as opposed to the several it's always reported she has gotten? Yeah, didn't think so.
Sure, it's fluffy and ridiculous and I'm sure you all have your opinions of Tori Spelling and her life so I won't bother trying to explain any of it away. I stand by it. I own it. It's a toss up between what was fluffier this summer, Stori Telling or Valley of the Dolls. But both have lots of pink on the cover, so that counts for something, right? Ok, you may proceed to mock me now.
Posted by Becky at 5:27 PM

I was WAITING for this review with baited breath! Hilarious, as always, Bec. I've missed your reviews. And hell, next time I'm in Hoboken, you might find me hiding in the bathroom reading this fine piece of literature (-:

Great review! I love your honesty and humor- no need to defend or excuse your choices. I think I probably enjoyed reading your review almost as much as you enjoyed the book.

If I can read it without having to buy it, I'll do it. Loved the review.

Hopefully, she at least included some pictures of Dean (preferably shirtless), because he is so FIIIIINE (fanning self). The most interesting thing about her is HIM, and that's still stretching it.
Hope it was a good read! I just can't. Not even for him.