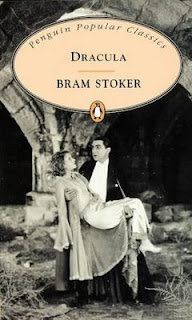 So I borrowed this book from Natalie, who highly recommended it. She and I typically have pretty similar book taste and exchange books often. However, this was one (much like "Middlesex") that I did not take to quite like she did.

The story is told mostly through the papers, diaries, and phonograph recordings of people involved in this bizarre story. The general story line is that of a Count that plans to move to a more urban setting (London) where there is a richer "diet." There he finds lots of women (who he can sink his teeth into). But he runs into some opposition, though he always seems to be one step ahead of them. It is interesting to observe the technologies and ideologies of the time, as Stoker describes them, but overall I just found it a bit too...ridiculous. Perhaps I should've read it as more of a comedy, though, because upon reflection, I think that may have been the intent, to a point. And by no means was it poorly written, but I tend not to be drawn so much to this time period in general and the overall writing style.
Having said that, of the blogging enthusiasts in the family I would say this is something dad or Amanda would gravitate to more than mom. It's a dense book but could be worth your time, especially since it is a classic. And, quite appropriately timed (more or less) with Halloween!
Posted by Becky at 1:17 PM