Time and Again by Jack Finney 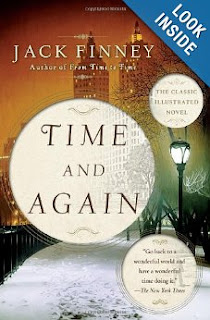 Every so often I like to liven up my reading list with older books that I might have missed when they first came out. Time and Again, first published in 1970, was brought to my attention last year after reading Stephen King's 11/22/63. King called this novel the best time travel story he had read. So, I decided to give it a try and I'm very glad that I did!

The story begins in November 1970, when the narrator, Simon Morley, a lonely and bored advertising sketch artist in New York City, is approached by an Army officer offering him an opportunity to participate in a secret government project. The project involves an experiment to test if it is possible to send people back to the past through self hypnosis. During his training, Si is told that "we're mistaken in our conception of what the past, present and future really are...We think the past is gone, the future hasn't happened, and that only the present exists. Because the present is all we can see...As Einstein himself pointed out, we're like people in a boat without oars, drifting along a winding river. Around us we see only the present. We can't see the past, back in the bends and curves behind us. But it's there."

Intrigued by the proposition, Simon cautiously agrees to join the project and is given the assignment to time travel back to New York City in 1882. Before you know it you, too, are taken along on a most exciting and enjoyable adventure, traveling back and forth between the 19th and 20th Centuries. Finney's meticulous attention to detail, period-appropriate language and pacing made this one of the most visual and magical novels I have read. With regard to the pacing, at times you feel yourself slowing down as you read passages from 1882 and then sense time speeding up as you return to the 1970s. Finney also uses a very clever and unusual device to complement the text. Throughout the book, he inserts actual photographs of 1800s New York street scenes, and numerous illustrations, supposedly made by Simon Morley (remember, he was a sketch artist) that practically make the story come to life.

This book is a classic tale of time travel but it also contains plenty of romance, a good mystery and many interesting historical details. I highly recommend this book to everyone in the family...including our future son-in-law. It's a fun read!

I love me some romance! It's on the list, thanks!!

I listened to this book multiple times and loved it, didn't know the book had picture, now I need to get the book and read/see it.