"Farewell My Lovely" by Raymond Chandler 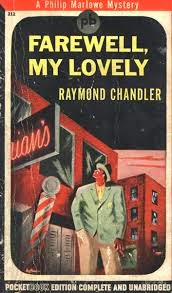 It’s mid-May, at least according to the calendar, and summer may be coming, if not in northern Michigan, at least in New Jersey and places not touched by the last ice age.  It’s time to read a mystery.


One of my all-time favorites is Farewell My Lovely by Raymond Chandler.  He’s one of the earliest and best creators of a hard-boiled detective, in this case Philip Marlowe.  Those detectives of the 30’s and 40’s were lonely men focused on solving a case while steering clear of the local police who were normally lazy and/or on the take.  Theft and murder were always involved but it just seemed somewhat less gruesome than what seems more the rule by today’s writers.  One thing that seems to jump out though is they smoked like chimneys and drank like fish.

In this story, Marlowe is on a dead end case when he spots a giant of a man, Moose Malloy, enter a night club looking for his girlfriend Velma.  She’s not there and Moose ends up killing the club owner.  The police aren’t that interested since the owner is black and Marlowe decides to look into it a little on his own.  This soon leads to a cast of shady characters who lie to, assault, seduce, drug and try to kill Marlowe.  It’s all done through Marlowe’s narrative of dry humor and snappy patter.  Since there were more novels featuring Marlowe we know he doesn’t die in this story, but the intent and fate of everyone else is not guessed until it happens.

Here’s another mystery.  Why suggest this book now?  Anyone who likes the genre and who hasn’t read this book should really pick it up over the summer, but the real answer will come in another post.  Enjoy.
Posted by Becky at 12:39 PM