After Dark by Haruki Murakami 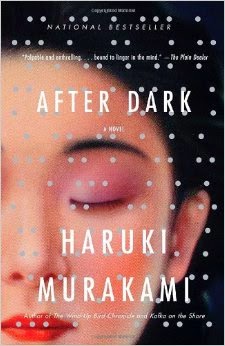 Yes, it's another Murakami book on the blog. Since Becky and I both like him we keep at it but if you've read the other Murakami posts and read one of the books and it wasn't for you, go no further.  It's hard to describe this genre since it blends realistic relationships and situations with otherworldly dimensions.  Labels almost always artificially repell or attract so leaving him unlabeled is a good thing.  Find out for yourselves.

This 2004 short novel follows a handful of characters through one night from just before midnight until just around dawn in modern Tokyo.  We know this time span because each chapter has a clock showing us the time progression through the book and their lives.  There is a narrator who describes some scenes as if through a camera but we also learn about them in their dialogue and actions.  I found the narrator a bit jarring compared to most descriptive styles but it was an interesting change.

You get a sense in the book that we live in a relatively concrete existence as individuals during the day but we tend to blend into each other and into other dimensions late at night, especially as we sleep.  It's tough to tell if the nighttime blending effects the daytime individual but there may be a relationship.  In the hands of a less skilled author this could get dry and ham handed and more like a psychologist's lecture and less like a good story with hidden meanings, but Murakami is one of the best authors of our age and the style and story work for him. As is a must with me to recommend a book, I liked most of the characters and the glimpse into their varied lives. I hope you do too.
Posted by Dave at 8:31 AM