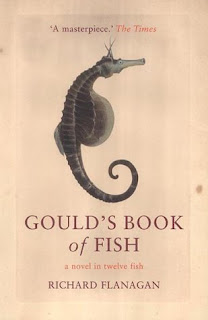 Richard Flanagan has been in the blog once before in "The Narrow Road to the Deep North." That Man Booker Prize winning book contained graphic and intimate scenes of a prisoner of war camp run by the Japanese in WWII.  "Gould's Book of Fish" is an earlier novel set mostly in an Australian prison run by the colonial English in the first part of the 19th century.  It too is a prize winning effort (Commonwealth Prize) but one that almost defies description.
The main character is a petty thief and forger who moves out of England to America and ultimately to Australia, where his latest run-in with the law gets him to an island prison off the coast of Australia.  In one way the story runs mostly in a straight line from getting on the island to his end (death?).  In another way, so many parts are so surreal, what with his name changes combined with the bizarre behavior of the prison staff, that you come away wondering how much is real and how much is in his head.  Since a novel by definition is a fabricated story, you may wonder what is the point of asking what is real.
Well, a story can seem more real than true events or sometimes be almost dream-like yet get at some other truth.  I believe the latter is Mr. Flanagan's intent. It is an extremely ambitious attempt at story telling on multiple levels that succeeds in an astounding fashion.  Among the truths are the capricious nature and brutality of the English penal system of the time, the many forms of love, art is in the eye of the beholder, the strong write history, and much more.
Normally citing someone else's book blurb just isn't done, but the Glasgow Herald nailed it "When we put it down, we'll either feel exposed to one of the greatest literary hoaxes in history or that we've just read what some are already describing as the first great book of the twenty-first century.  Or who knows? Maybe both?"