In A Sunburned Country by Bill Bryson 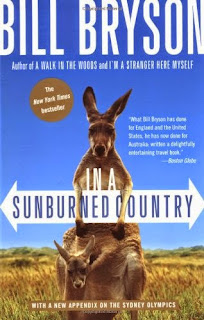 Sometimes a book from my men's book club makes it into the blog and more times than not, it doesn't.  There's only so many times you can read about WWII and the Civil War (ours, not any other country's).  However, we have members who like a lighter read and their nomination sometimes makes it through the voting.  This is one of those, and I'm glad it made the cut.

Bill Bryson is a good and prolific writer.  Previously he generated a best seller on his walk over a large portion of the Appalachian Trail called "A Walk In The Woods".  He generated this book in time for the 2000 Sydney Olympics.  Over the span of multiple visits, he experienced all the major Australian cities and quite a few road houses throughout the country to give a humorous and reasonably factual look at this large country (about the size of the U.S. lower 48) with somewhat fewer people than live in Canada.

The result is a fun read that is worthwhile even if you never visit Australia.  Having gone there once and seen just a little of what he writes about, he captures the essence of the country nicely.  His description of their maddening little flys is just right.  His description of all the snakes, spiders, plants, aquatic animals and who knows what else that can kill you in an instant is right on target.  When Jackie and I visited a remote park with a sign of all the dangerous denizens within, we could encounter not only something called a Death Adder, but a different snake called a Common Death Adder. Somehow knowing something with death in the name is that common was a bit off-putting.  Bryson has many stories giving Australia its due as a country to be respected and admired, and you'll probably laugh out loud a number of times while reading them.  A good summer read.
Posted by Dave at 10:53 AM