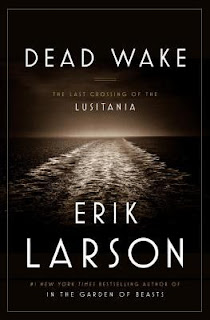 Erik Larson has been in the blog before and his latest tale about the last voyage of the Lusitania is a welcome addition to his growing list of accessable historical accounts.  As he has done before, he relates the overall tale by sharing the stories of different participants.

For those not familiar with the Lusitania, it was an English ocean liner in the mold of the Titanic and was torpedoed by a German submarine in WWI.  That event was one of the tipping points that brought the U.S. into the war on the side of England and France.  Prior to that the U.S. was neutral and there was a strong sentiment in the country to stay that way.  Unlike FDR's desire for the U.S. to enter WWII much earlier than we did, President Wilson tried to keep the U.S. out of the war.

Of the individuals in the book, the one's I found most interesting were the captains of both the Lusitania and the submarine, some of the passengers that both survived and parished, and the quiet dealings of the English government and military.  England knew the submarine was in the area, took steps to safeguard its naval vessels while providing confusing information to the steam ship line managment regardig the safest way for the Lusitania to proceed.  They also provided no escort at all for the ship, even though a number of destroyers were in the area.  A good case can be made that England would just as soon have a disaster like the sinking of the Lusitania to force the U.S. into the war and their actions and inactions were an effort to achieve that end.  Give it a read and decide for yourself.
Posted by Dave at 8:17 AM