The Swerve - How The World Became Modern by Stephen Greenblatt 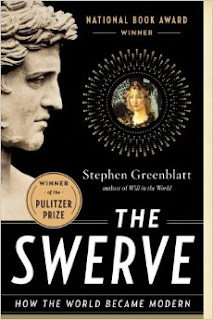 This book won the Pulitzer Prize and the National Book Award and the book's title suggests a monumental story of the world's coming of age.  With those awards and that title, it's hard to begin a book like that without having great expectations. Those expectation were not met but it is a worthwhile and intersting read.

The story focuses on a Renaissance scribe who rises to the peak of his profession to become a key member of the papal nonsecular hierarchy.  One of the reasons for this rise is his excellent grasp of ancient Latin.  When he is no longer part of that heirarchy, he goes on a quest for rare pre-Christian books by famous Latin pagan thinkers.  He discovers a text that was alluded to by other writers and is so impressive that when it makes it into print in the post printing press era, it may have had a profound effect on the thinking of key scientists and philosophers for centuries to come.

The discovered text is "On The Nature of Things" by Lucretius.  It is a dense, two hundred plus page poem that within lies a strikingly modern view of the world and a condemnation of superstition. The story of its discovery and impact is a tough one to tell because the time of discovery was so complex and connecting the text to modern outcomes is so nebulous..  Mr. Greenblatt does a very good job of focusing on the scribe, Poggio Bracciolini, and using his life to give understanding to the 15th century and how rooted in the past most of Europe was at the time, due in great deal to control of the church.  Think being burned at the stake for saying the earth is not the center of the universe.  However, going back to the creation of "On The Nature of Things" and proceeding all the way to Thomas Jefferson, "The Swerve" contains a lot of connections that boil down to they might have read the book or they might have said this and that.  With the lack of actual descriptions by those historical figures that provide that connection, these multiple suppositions may be true but take away from what  is an excellent piece of history and a revelation of the thinking of ancient thinkers.
Posted by Dave at 6:14 AM