A Spy Among Friends by Ben Macintyre 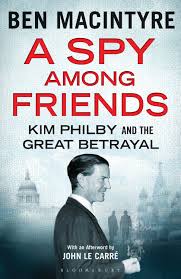 Any reader of spy history, especially the English agency MI6, has probably heard of Kim Philby.  Mr. Macintyre focuses on Philby's friendship with a close friend, Nicholas Elliott, to tell this story of almost unfathomable hubris on the part of the English spy community that allowed "one of their own" to operate as probably the most important Soviet spy ever.

In the '30's, the Soviet Union was envisioned within the elite English universities as the best hope of blunting the impact of Hitler on Europe and the world.  Communism was viewed as a viable governmental model, even as stories leaked out of the USSR of mass killings in the name of the people.  As the coming war loomed, the English intelligence community started recruiting likely candidates for intelligence work.  The vetting process mostly consisted of someone within MI6 knowing someone from college or family friends and asking if they wanted to do important work for the crown.  Open collegiate affiliation with Nazi-favorable organizations was far more likely to generate suspicion than similar affiliation with the Communist party.

In 1937, Kim Philby was a party member and, through university contacts, volunteered his services to the Soviet Union.  From that point forward, he was a loyal contributor to the Soviet cause until after retiring from spying decades later.  Since he rose to key positions within MI6, including the liaison with the CIA in the 1950's, he was able to inform the Soviets of every major effort to spy on the USSR from immediately after WWII into the 1960's, resulting in the deaths of probably 100s of agents and those who were innocent civilians who might have had an anti-Soviet leanings in post-war eastern Europe.  When Philby came under increased suspicion after two close friends defected, MI6 did everything in its power to protect Philby from various probes from the English equivalent of the FBI, MI5, and from U.S. inquiries, including the FBI.  When MI6 finally came to realize the allegations were probably true, it appears they let him defect rather than face an inquiry that would have brought discredit to MI6.

This is a fascinating account of an agency supposed to be one of the best in the world.  I found it depressing that the English class system had such a profound negative effect on decades of intelligence work.  This is a must read for followers of spy novels and intelligence history.
Posted by Dave at 11:50 AM