A Tale for the Time Being by Ruth Ozeki 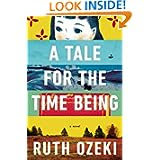 My name is Nao, and I am a time being. Do you know what a time being is?...A time being is someone who lives in time, and that means you, and me, and every one of us who is, or was, or ever will be.


So begins one of the most original, captivating and thought provoking novels I have read in a long time. Ozeki weaves together the story of Ruth, a novelist living on a remote island in British Columbia and Nao, a 16 year old girl living in Japan. Ruth discovers a plastic bag washed ashore near her home and wonders if it could it be debris from the 2011 Japanese tsunami? When she looks Inside the box she finds a Hello Kitty lunchbox containing several items: a man's wristwatch, a bundle of old letters and Nao's diary,"the diary of my last days on earth." Once Ruth begins to read Nao's diary there is no turning back...you, too are drawn in and compelled to keep reading along with her.

A Tale for the Time Being is a complex and multi-layered novel. It is as much a mystery story, as it is a meditation on the passing of time, and an exploration of the relationship between writer and reader. Interestingly, the novels of Marcel Proust play a key role in telling the story. As Proust writes, In Search of Lost Time, "In reality, every reader, while he is reading, is the reader of his own self. The writer's work is merely a kind of optical instrument..."

Interwoven throughout the novel, are an eclectic array of subjects- history, morality, World War II, Zen Buddhism, quantum physics, bullying, suicide, animal spirits and totems- yet they blend together to create a unique and quite unforgettable story.

A word of caution, though. While the prose in the first half of the book is beautiful, lyrical and eerily hypnotic, the second half will jolt you out of your trance with a much grittier and more disturbing tone. That said, the transition is a surprisingly effective device that ultimately pulls all the threads together and creates such a graceful, uplifting and wonderful story. I highly recommend it.

Bring Up The Bodies by Hilary Mantel

﻿
English history, especially when it concerns the time of Henry VIII, is not for everyone.  It was a chaotic time, what with him cycling through various wives trying for a male heir.  We know he ended up with 6 wives and some of them met bad ends as he used various excuses to move on to the next one.
That said, Hilary Mantel has woven a fascinating tale from the perspective of Secretary to the King, Thomas Cromwell.  It falls to Cromwell to manipulate available circumstances to allow Henry to rid himself of Ann Boleyn so he can marry Jane Seymour.  Those lords and ladies who benefit by having Ann with Henry maneuver to avoid the break, while those who benefit by Jane stepping in spread rumors and try to hasten Ann's departure.  Since Cromwell is not a peer, he is mistrusted and looked down upon by most everyone in Henry's court.  For the time being, Henry trusts him and that allows Cromwell to proceed with the king's bidding.  You really don't need to know more than that about the circumstances, but it helps to remember that plotting against Cromwell normally turns out badly for the plotter.
There are a huge number of characters and you can become confused by Ms. Mantel's sometime lack of attribution as to who is speaking.  If you focus less on the names and more on Cromwell and how he dodges and maneuvers through each day, those names become less important.  You start to sense who is going to be alright in the end and who really shouldn't have done something to make Cromwell think less of him (or her).  We tend to look at history and assume the outcome was somewhat preordained, but this book hi lites just how tenuous not only the succession of the next monarch was, but also how Henry himself had to continuously move to remain in power and alive.  I couldn't put it down.﻿
Posted by Dave at 8:29 AM No comments: 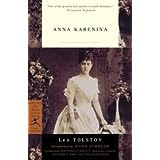 "Happy families are all alike; every unhappy family is unhappy in it's own way."


The first sentence of Anna Karenina is still one of the most recognized opening lines in world literature. Considered by many to be one of the "best novels" ever written, this epic work was originally published as installments in The Russian Messenger over the span of two years (1875-1877). This novel contains all the necessary ingredients for a modern-day soap opera or cable TV series- love, family, betrayal, marriage, scandal, and forgiveness. Yet, this story is anything but trite melodrama.

I recently spent two months reading all 923 pages of this sprawling masterpiece (Modern Library Edition). It was the perfect tome to hunker down with for the cold, snowy days of a Northern Michigan winter. Although the book was written almost 140 years ago, it is still surprisingly relevant, in many respects, for contemporary readers. It is a classic piece of literature that didn't feel like a chore to read. It definitely was not like One Hundred Years of Solitude. At least not for me.

As the title suggests, the character of Anna Karenina is the focal point of this fictional story. However, the novel is really about so much more than the consequences of one aristocratic woman's adulterous affair. Tolstoy's artistic prose weaves together a large and complex tapestry of characters, themes and plot lines, all set against the backdrop of late nineteenth century Russian society. In reading this book, at times it did feel somewhat like reading an op-ed piece. Tolstoy shared his own opinions- through the voices of the seven main characters- to expound upon his personal musings and moral beliefs about many of the most controversial topics of the day. He argues, for example, about such things as the virtues of rural vs urban life; or the distinction between class and society; faith and religion; as well as the emerging role (emancipation) of women in society. Anna, his tragic heroine, is made the poster child for what could happen if a woman stepped outside her "role" of wife, mother, caretaker.

Anna Karenina is a beautiful, emotional and insightful commentary on life. Read it for the love stories. Read it for the history. Read it to simply savor the language. It just might be one of the best books ever written.