I have a dilemma. The Salmon Rushdi review referred to it as a hoot. "Straight Man" by Richard Russo, also is a hoot in a somewhat different way, so hoot needs clarification. A hoot is a combination of funny (from ironic to laugh-out-loud) and complex in a good way. Rushdi's book was ironic with a dense and outlandish plot. Russo's book is laugh out loud funny with a compelling plot that is only slightly outlandish.
With that out of the way, let's continue. If you like "Empire Falls" or "Nobody's Fool" then you will like this book. For those who have not read either of the others, Russo gives you a man negotiating life's normal problems with humor and insight in a small town that has seen better days. In the case of "Straight Man" the town is equally down-and-out with the main character, William Henry Devereaux, Jr., being a college english professor with a wise-ass approach to life. The book hit close to home because WHD's dialogue sounds like what often goes through my head. It took a while to finally suppress most of the dialogue (but not the thoughts) because, as my father used to say, nobody likes a wise ass. In "Straight Man" many people do not like WHD for that reason. An equal number do like him because he is a funny, decent guy, but are exasperated by what looks like self-destructive behaviour. Most of the plot involves a week or so as he nears 50 and his wife is out of town. He's a man at war with himself but doesn't quite realize it. Following him to a satisfying conclusion is a fun ride through this interesting life. I'm pretty sure all of you will like this one.
Posted by Dave at 6:57 AM 2 comments:

I know, I've had this discussion with Jackie, Becky and Amanda. Salman Rushdie? The guy who angered an entire religion and had a death sentence on his head for his writing? When you could be cruising with Torri Spelling? That Salman Rushdie? Yes, and he's a hoot.

Envision the story of the birth and beginning of the life of India as told by Forest Gump on crack. Add in the magic story telling of (I can't think of anyone else who can make up this stuff) and you've got what I think "Snow" was supposed to do for Turkey but failed miserably. To help you out, the narrator gives you a running start by giving you two generations before he was born at exactly midnight of the day India became a nation. As it turns out, anyone born around that hour was gifted with some kind of magic power, from changing their own sex at will, to multiplying fishes, to really being able to do magic, to (well, you get the idea). As a conglomerate, they are called midnight's children.

Now, it would probably help if you knew the background of the gazillion deitys that make up the Hindu religion but he gives you enough background to know a guy named Shiva will not be the hero of the story. It would also help to understand whichever language is Rushdie's native tongue (India has about as many languages as it does gods) so you would know when the thing he is eating (or is floating down a river) is a fish or a sweet piece of cake. In the end, it's sort of fun to figure it's either and see which way you like the story best.

Finally, I like his style. He tells stories with lots of parenthetical asides, as do I. Although some may find it annoying (present reader's company excepted), it worked for me. Of our faithful readers, Amanda would probably like this best but it really is a heck of a story and worth the 533 pages (did he say 533?) to tell the tale. Enjoy.
Posted by Dave at 1:30 PM 2 comments: 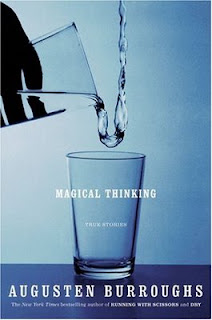 I loved this book. Yes, I realize that Amanda may run away screaming because it's by Augusten Burroughs, acclaimed author of Running With Scissors, but this is a fabulous collection of short stories that had me laughing out loud. If any of you are David Sedaris fans I think you would get a kick out of this book. And the comparison isn't only with the writing style, though they are quite similar. His sexual preference (yes, he's gay), the slightly disturbing childhood and family drama (though, arguably, Burroughs had it way worse), and the humor with which he deals with it all is just...well, refreshing!
Even though Burroughs has unquestionably had a crazy, disturbing life, he addresses it with such humor that you actually find yourself relating to it...I swear! I think my favorite story is about him living in New York City and encountering a rat in his bathtub. This is a pretty typical New York City story - the whole rodent infestation problem, etc. But the way with which he goes about destroying this creature, and feeling this tug between good and evil, humanity and cruelty - it was absolutely hilarious.
If you're looking for a quick read, and (like most short story collections) a book you can put down and pick up at any time, this is your book. I realize this is coming from the person who read, blogged about, and even reveled in Stori Telling, but I swear...this was good!
Posted by Becky at 2:04 PM No comments: