"I Feel Bad About My Neck" by Nora Ephron 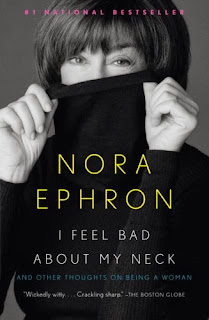 “Oh, how I regret not having worn a bikini for the entire year I was twenty-six. If anyone young is reading this, go, right this minute, put on a bikini, and don't take it off until you're thirty-four.”
― Nora Ephron, I Feel Bad About My Neck: And Other Thoughts on Being a Woman

So several years ago, Courtney recommended this book to me because...obviously. I mean, if you've ever spent more than three minutes in a room with Courtney and me, you will likely hear some quote from one of Nora Ephron's movies over the last three decades.

Remember when we had a "Sleepless in Seattle"-watching party via phone when she passed? We're not well women.

Anyway, I have to admit that when I picked it up several years ago, I was underwhelmed. Probably because Meg Ryan wasn't in it? Also, because maybe I was too busy worrying about my own neck.

Either way, when I picked it up again last week I was pleasantly surprised that I was dumb the first time to have put it down. I mean, at 35 I'm still feeling pretty darn good about my neck and my eyes and things in general. Everything is more or less in the place it was when I was born, and even though I've been offered free Botox by friendly dermatologists in the past because I have my dad's furrowed brow, I'm more or less content.

Nora Ephron was not. And it's really funny.

She basically verbalizes what goes through our heads as women on a near-daily basis, content or not. Or, those of us who are maybe a little neurotic (and aren't we all?)

“Here are some questions I am constantly noodling over: Do you splurge or do you hoard? Do you live every day as if it's your last, or do you save your money on the chance you'll live twenty more years? Is life too short, or is it going to be too long? Do you work as hard as you can, or do you slow down to smell the roses? And where do carbohydrates fit into all this? Are we really all going to spend our last years avoiding bread, especially now that bread in American is so unbelievable delicious? And what about chocolate?”

It's like she's in my head. And bread is for real the delicious work of the devil.

Either way, mom, I'll bring it home at Christmas and you'll likely finish it in a day (it's 160 pages - I'm embarrassed how long it was on my nightstand).

The Bottoms by Joe Lansdale

Mysteries have changed over the years.  We started out with a theft, extortion, or even murder being solved by someone from the police, a consulting detective, or even a nice old lady who was pretty sharp and noticed things not seen or considered by others.

Over time, the crimes were described in much more brutal detail and the criminals started becoming more sadistic.  Now and over the last decade or so, it's hard to read even a very well written mystery that doesn't have a serial killer and some pretty explicit detail regarding the victim's plight.  That is the case with "The Bottoms."

In early 1930's east Texas, everyone is poor and living through hard times, including 12 year old Harry Collins and his younger sister Tom (Thomasina).  They've got decent parents doing the best they can, with Harry's dad working the farm, owning a barber shop, and also being the local constable.  When Harry and his sister find a "colored" woman brutally murdered down by the river, his dad tries to investigate.  The white population doesn't care and the "colored" folks don't want it investigated because eventually someone from their community will get lynched, even though they may not have done it.  When more bodies show up, the Klan verifies that opinion.  When the dust settles, Harry and his sister try to figure out if they got the right man.

The book feels and reads like "To Kill A Mockingbird" except the language is rougher when describing the black folks and the townspeople don't come across quite as genteel as TKAM.  That's probably because it feels closer to real life, but it doesn't make some of the reading any more comfortable.  It's a dark story pretty well told.

That said, I expected a bit more from an Edgar Award winning book.  Perhaps it's quibbling to expect consistent detail, but when grandma has a 32 pistol in one sentence and when she later pulls it out a couple of sentences later, it's a 38, it's kind of jarring.  Same for the shotgun she was holding later that turned into a rifle.  Hey, this isn't Harry Potter!  There were also outcomes near the end that you could see coming for a while and that's always disappointing.  Still, if you like mysteries, this one is better than most.
Posted by Dave at 5:02 PM No comments:

Most peoples of the world have taken water for granted, even when they realize it may be poisoning them and they are the reason for the poor quality in the first place.  The first U.S. clean water law in the late 19th century was passed not because the Hudson River was a cesspool, but because there were so many dead animals dumped into it that it became a hazard to navigation.

We've gotten better at protecting the environment enough that we don't harm ourselves as much as in the past, but the author makes the case that water will be the cause of some of the great political conflicts in this century.  Whenever it is cheaper to get fresh water from somewhere else rather than clean up the situation nearby, the local solution always is to get that other water. The Great Lakes contain about 1/5th of the world's fresh water and is an ongoing target for those schemes .

A recent example was a proposal in 2005 to take a large ocean-going tanker ship into Lake Superior, fill it with water, and transport the water to S.E. Asia.  There have been attempts to divert water out of the lakes for local and not so local consumption in the states bordering the Great Lakes and those efforts have resulted in a compact between the states and provinces bordering the lakes that is flawed and needs improvement to truly protect the Great Lakes over time.  Mr. Annin details the history of those efforts and the resulting compact(s) in a way that is very readable.  It's a fairly quick read and is a topic that is current in each area of the U.S. Current examples include Florida and Alabama fighting with Georgia over water for Atlanta, the Great Plains running out of water for agriculture, all of the Southwest, water diversion in the Northwest, and issues with supplying the greater New York City area.

I'm glad I read this book, even though I would not normally have done so except it was my local book club's selection.  The environment is important but many environmental writers are so earnest and rigid that it takes away from the message.  That is not the case with this book.
Posted by Dave at 11:51 AM No comments:

The picture I copied online of the book cover came out a little fuzzy, which is appropriate for this book review.  David Mitchell is a good writer who leans a little too heavily on writing tricks to punch up this story of a modern Japanese 20 year old headed to Tokyo from the provinces to meet the father he's never known.  I like coming of age stories, which is probably why I stuck with this story-on-drugs in spite of the opening pages.   Eijie Miyake is not on drugs, other than an endless string of cigarettes,  but the story switches from LSD-like daydreams to crystal meth-fueled descriptions when he accidentally gets mixed up with brutal Yakusa bosses.  David Mitchell's reliance on switching from day dream to day dream early in the book almost had me put it down, but once it was apparent that any one paragraph might not still be in the same mode (dream, reality, somewhere in between) as the preceding paragraph, yet it would make sense as you stayed with it, caused me stay with it and actually enjoy the book.
Mitchell didn't need to use all these tricks.  The last book of his that I read, "The Thousand Autumns of Jacob DeZoet" was a linear told story that was beautifully written, with an interesting twist about a third through the story.  "Number 9 Dream" is no less interesting, and I liked Eijie as he wrestled with past memories, regrets, resentment and hope.  When I got to the end, I wanted it to keep going because I cared about Eijie and his friends and relatives and we were left hanging as to their future.
The more I thought about it, that was part of the reason Mitchell used some of his techniques, since the idea that the world is seldom as it appears and our futures are controlled by the unknown, with the rules changing just as we think we are winning or loosing, is the central theme of the book.  It reminded me of books by Haruki Murakami, who Becky likes (as do I) so that's why I decided to post.  If you figure the reality jumping may be too irritating, skip the book.  If you're willing to give it a shot, it's a good story with many interesting characters and some satisfying outcomes.  Of the family, I'm guessing only Becky would like it, but for other readers, if you like Murakami, you'll probably like this.
Posted by Dave at 10:54 AM No comments: