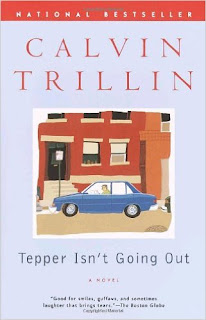 In another Calvin Trillin book of small stories and poems, "Quite Enough of Calvin Trillin", there was a two pager about a man sitting outside of a deli reading the paper.  Mr. Trillin expanded on that glimps of Murray Tepper to create a gentle story of a man, his family and his city.

Murray is a partner in a company that sells lists to companies that want to use mail order to sell their product.  They can see that the Internet is becoming the way to sell, but they're doing ok.  Murray quietly makes connections between people who like one thing and those who might buy a different product.  After work, even though he now has a rented space in a parking garage, he uses his past experience when parking on the street to find a "good spot" to sit for an hour and read the paper.  The spot varies but is always a legal spot, including paying a quarter to be able to sit for an hour.  If someone drives up before the hour is up, thinking Murray is going out, he waves them off.

Meanwhile, the current mayor believes the key to running the city is having strict traffic enforcement, which includes parking.  The mayor has other law and order ideas, mostly about order and not so much about the law, and the previous mayor might be running against him in the next election.

As the story unfolds, Murray is discovered, becomes a celebrity, and is the object of other people's expectations and views.  As is the case with all of Trillin's writing, it is told with seemingly effortless gentle dry humor.  While reading the story, there were any number of topics from today's headlines  that appeared to be gently mocked.  Then seeing the copywrite, he wrote this 15 years ago.  It is an ageless story of a perfect gentleman.  Everyone in the family should like this book.
Posted by Dave at 8:08 AM