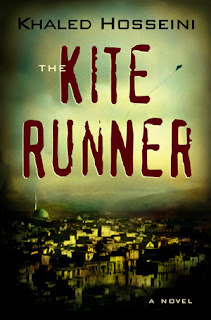 This was a powerful book. I wasn't quite sure how I would feel about it when I read reviews on various websites, but decided to give it a chance. I sometimes shy away from "NY Times Bestsellers" when there's too much hype about it because I feel like it's just not as good as the hype (and usually I find that I'm right). But I was pleasantly surprised.
This is a very moving book that spans life in Afghanistan over 40 years (through present-day Afghanistan which, as you would imagine, is bleak). But it's much more a book about a young boy, Amir, seeking the approval of his father, feeling torn between his friendship with the son of his servant, and what his culture deems acceptable....but most of all it deals with choices and how those choices can haunt you, change you, and if you're lucky, redeem you. I was also struck by the hopeful feeling I came away with after closing the last chapter; even during the bleakest moments and the most horrendous crimes, humanity and compassion surrounded Amir and it contributed to why I didn't want to put this book down. I found myself turning the pages in anticipation of where the story was going... and sometimes cringing at the often graphic depiction of the unrelenting violence that is forced upon the citizens of this war-torn country.
I highly recommend this book, though I have a feeling Amanda and dad might prefer it over mom (since you expressed not-too-much interest in the topic, which is why I think you probably will pass). I already warned Amanda that there is some gruesome violence and some dappling with child abuse (can you simply "dapple" in child abuse? Maybe not the best choice of words) - so you are forewarned (I am forever scarred by your repulsion of Running with Scissors, so want you all to be prepared!).
Posted by Becky at 12:45 PM