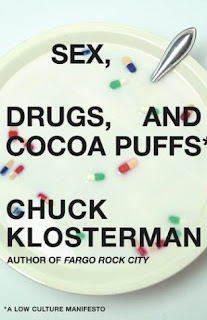 So now that Amanda has officially kicked off the new year with her book review, I decided to follow suit. And I'm happy to report that my first review of 2008 is a good one! I really enjoyed this book, which is a collection of essays by author Chuck Klosterman. Klosterman was a columnist for Spin magazine and the essays are all about pop culture and, mainly, the 30-somethings out there who grew up with shows like The Real World, Growing Pains, etc. It is hilarious and poignant and he really is right on the mark with much of what he observes, which is everything from reality television to why Billy Joel is underappreciated (it's hilarious). And it's such a fun read because, as a (new) 30-something, I could relate to nearly every pop reference he made! I think this is a book that Amanda would definitely enjoy, and is such a quick, fun book - you can pick it up, read an essay, skip essays, whatever you want. It's the perfect book to have laying around when you want a good laugh. Definitely one of the better books I've read in a while!
Posted by Becky at 5:08 PM