The Long Emergency by James Kunstler 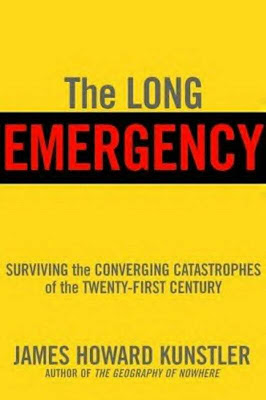 The author of this book was interviewed on "The Colbert Report" for his new book "World Made By Hand." I thought he was kind of a kook (but entertaining!) Like everything else, I didn't want to dismiss him out of hand. So I checked into some of his other books at the local library where I came across "The Long Emergency." It sounded pretty apocalyptic but I thought I'd give it a try anyhow...just to see what this guy was about.

Well, the book was fascinating! Basically, Kunstler explains his theory that the world is about to hit peak oil, and what the ramifications of that may be. I'd heard talk about peak oil before but never completely understood what it was. The book uses good references and citations to scientific studies and oil industry insiders. I found many of Kunstler's arguments coherent and well-reasoned. It makes a lot of sense that we're about to (or already have) reached peak oil. It also stands to reason that much of our lifestlye will have to change as oil becomes rarer (and costlier.) I have often thought that our economy will naturally transition to some other, more sustainable, energy source when the price of oil becomes too high. And Kunstler argues that we will definitely try. He lays out all of the alternatives to oil and how they will probably be used after peak oil. He pins his best bets on nuclear energy for running appliances, etc. But the point he made about oil that I had never thought much about before is: oil is portable, ships easily, relatively safe, and abundant. Most other energy will not run our cars (ship our food, make our plastics, fly our planes.) Really, he brought up so many things I'd never thought of before he made me a believer.

That being said, Kunstler IS rather apocalyptic and believes society will be taken by surprise and have a long, uncomfortable period of converging catastrophes to deal with which will decimate large populations and force much of society to be rebuilt. Some of the other catastrophes include climate change and disease pandemics, along with the depletion of oil. A big part of me says "No way, we won't be caught so off guard. Technology and society will adapt in time to prevent huge population losses, at least in the U.S." And hopefully that's true. But his argument that our entire way of life in the U.S. (i.e. suburbia, constant economic growth, etc.) is incongruent with an oil-less world is awfully compelling.

One last thing: as I was dismissing some of the author's more far-reaching predictions for the near future, he began talking about the housing crisis. He explained everything that's currently happening in the housing market and how that will affect the rest of the economy. The creepy thing is, this book was published in 2004, before any of this started happening. The detail and exactness with which he described the housing bubble and his prediction of how quickly the price of a barrel of oil would shoot up in the next few years (i.e. NOW!) was frightening. It makes me give the rest of his predictions even more credibility.

I don't know if the rest of you would find this as fascinating as I did. But I hope at least one of you reads it so I have someone to discuss it with. I'd really like to know what you guys think. Let me know.

Peak oil ? I remember my college junior year as a geology major in 1970 and the date of 2010 was given. It seemed far away but very close as I saw mile after mile of freeway built with their attendant offramps to an auto-based existance. Invest in nostalgia if you must. Otherwise, recycle and reuse, and hope your school district can afford to keep the buses running, etc.

This sounds like it ties in well with The Worst Hard Times (WHT) and Collapse. Jackie's item on WHT and my add regarding Collapse (in May of '07) seem to work. I think global warming doesn't get enough people concerned about our effect on the environment (the science still is not compelling for me) but general resource use and the destabalizing effect it has over time is very compelling.