A Heartbreaking Work of Staggering Genius by Dave Eggers 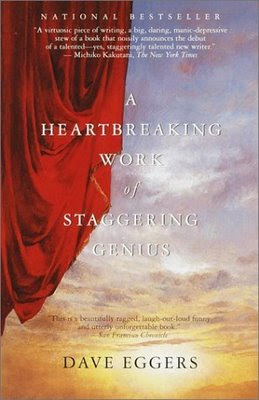 If there's anyone who might enjoy this, out of those who read this blog (family-wise), it'd be Amanda. Though I'm not sure exactly how you'd feel about it because I got the same feeling reading this as I did reading Chuck Klosterman's Sex, Drugs, and Cocoa Puffs and - dare I say it - Augusten Burroughs Running With Scissors. I dare to say it fits somewhere in the middle, which may be a turnoff to Amanda altogether. But it made me laugh in the same way those books did, and had the same overall tone.
This book almost won the Pulitzer prize when it came out and I've seen it over the years but have put off picking it up until now. It's definitely a book I can see a young 20-early 30-something guy relating to quite well. But being an (early) 30-something gal, there were definitely bits I could relate to as well (like when he tried out for the San Francisco season of The Real World...I never did so, but all of the references made complete sense to me, as they would most people of my generation).
Anyway, it's a literary autobiography about this guy who moves to San Francisco from Chicago after the death of his parents to start a hipster paper, raising his younger brother and dealing with being a young guy trying to support his family. He has to deal with his other siblings who are more or less in the picture when it's convenient, all while trying to figure out who he is.
Sometimes the writing style got on my nerves with it's stream of consciousness feeling, and going back and forth between the past and present took a second to get used to. But for the most part it helped the book flow and move quite well, and there were definitely some laugh out loud moments.
Do I think it's one of the best books I've ever read? No. But typically when I read books that have been up for or have won the Pulitzer Prize or National Book Award, etc., I feel as if it's praise for something maybe not quite worthy. Or maybe I just don't get it.
But that's not to say I didn't enjoy the book, I actually really enjoyed it. But it was a book about a guy who dealt with some really heavy family stuff pretty early in life and had to grow up (though whether he actually did grow up for a while there is still up in the air) earlier than most. It's a "coming of age" piece that I think has really resonated with a lot of people for no other reason, perhaps, than because he was able to put on paper what others can only partially conceptualize. It was good. A quick(ish) read and a book I think will find itself worked into literary and pop culture references for years to come. Worthy of the Pulitzer Prize? Probably not. Worthy of your time? Yep.
Posted by Becky at 5:40 PM