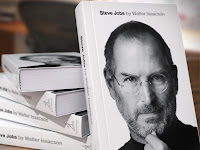 Steve Jobs was an arrogant asshole. You still with me? Ok, now you should totally read this book. While I know members of this fine family have their personal feelings about Apple and Apple products, perhaps even about Steve Jobs himself, this is a book worth picking up. As an iPhone and iPad owner, I clearly drank the Kool-Aid. And boy is it tasty. Mmmm…sugar.

Focus, Becky. Ok, but seriously, you don’t need to own or have owned an Apple product or even like Apple products to have respect for just what Apple has done for our society. Good, bad, or in between, it’s changed us. And Steve Jobs, love him or hate him (and there are about 10 people, I think, who loved him), was a mad genius. And I don’t mean that in the Boston “wicked-smart” sense, either. He was mad, and he was a genius.

While this book is more than 600 pages long, I didn’t find anything slow or extraneous about it. Walter Isaacson, the author, has written a few biographies that I think mom and dad have read – Einstein and Benjamin Franklin. And as Isaacson states in his intro, he’s quite sure that Steve Jobs saw himself as a natural progression of that list.

This was a fascinating portrayal of a very complicated, mercurial, selfish, brilliant, eccentric, sensitive, strong, elusive man. He brought computers into the mainstream, made them cool, accessible, flashy, and functional. He brought animation into the 21st century before we were even in it, and he changed the way in which we buy and access music, movies, and information. Steve Jobs was an arrogant asshole. And this was one of the best books I’ve ever read.
Posted by Becky at 1:05 PM

I want to read this one. I don't know that much about Jobs so I don't have an opinion either way. But with all the hoopla around his death (well, I guess mourning is a better word for it, but still) I thought he seemed like a pretty inspiring guy. I will definitely check this one out. Thanks!