Lean In by Sheryl Sandberg

“It’s time to cheer on girls and women who want to sit at the table.”
– Sheryl Sandberg

More than half of American women are the breadwinners in their households, yet they still earn 77 cents for every dollar a man earns. This is likely not news, but for a while it seemed as if we’d been pretty silent on the subject.

However, back in March, a new book by Sheryl Sandberg sparked a lot of conversation – some thought what she said struck a chord, others found it controversial, hypocritical, or elitist.

So I decided to check it out for myself.

I’ve always been interested in why, in 2013, there are still some pretty glaring differences in earning power between men and women, and have wondered how I can circumvent that so I don’t fall into the trap myself. And while I learned a lot of incredible, relevant, and eye-opening things while reading Lean In, I think the biggest takeaway for me was simply: “Sit at the table.”

You’ve got to be in it to win it, ladies!

Also, I take issue with much of the criticism of the book. Some say that Ms. Sandberg’s advice was too critical of women, saying that we need to change the way we behave in the workplace to better position ourselves for leadership roles. The other is that her advice only applies to an elite circle of women.

The first point I understand. She does talk a lot about how we, as women, need to be aware of the fact that gender in our society, whether we like it or not, does play a role in how we’re perceived – both by men AND women. And I think it’s wise that we don’t pull the wool over our eyes and pretend like this isn’t the case. So the fact that she addresses this point and gives advice on how to work with it is something I found quite useful. 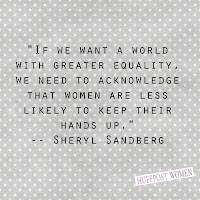 The second point I didn’t notice at all. If anything, she acknowledged several times that she comes from a place of privilege and realizes that many do not. She also acknowledged that “success” can be measured in many different ways, and it’s up to us to define that for ourselves.

Basically, if you couldn’t already tell, I really liked this book. It made me feel empowered and enlightened, and helped open my eyes to things I see every day in my own working environment. It was an easy, quick read at less than 200 pages, and while I’m sure the majority of the people who pick this up will be women, I think it’d be wonderful if men were reading it, too.

How could there be no comments? This was a great review. Really, the rest of the family will have to up our game after this one. Great job and thanks for raising the bar.

Haha thank you! If it helps, there were a lot of people who looked at it, from what I can tell. I'm glad you liked it!

Great review...sounds like a worthwhile book for anyone in the workforce today.