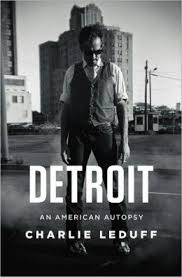 As a Michigan native, I was drawn to this book because I, like so many others around the country, are morbidly fascinated with the city of Detroit. Growing up, we went there for Tigers games and the art museum, for a bite to eat and a show at the Fox theater a few times a year, if that. But we didn’t shop there, we didn’t walk downtown, we didn’t frequent any parks or marvel at the skyscrapers.

I have friends who are hardcover Detroit City lovers, and I am too, in a way. But I’m not naïve and I’m not blind to the realities of what is happening and has happened there over the last five decades or so. It’s one thing to get excited for the potential that it holds – the young artists and entrepreneurs who are and have been moving in over the last few years, the first mayor in more than thirty years who actually seems to give a crap about the city and its future.

But Detroit went bankrupt for a reason, you guys, and it’s no clearer than when you read Charlie LeDuff’s portrait of this crumbling American city, once thriving under the car industry and booming with promise.

Get ready, though, because he doesn’t paint a pretty picture. He’s not looking at Detroit through the lens of an optimistic artist. He describes frozen corpses, burning houses, corrupt, thieving politicians, strung-out derelicts, and  murdered children. And he points out that these occurrences are as common and as unremarkable to the jaded citizens of Detroit as the Empire State Building changing colors every day is to New Yorkers.

But it was a book I’m so glad I read and one that gave me both perspective and odd hope for the city that once was. LeDuff paints a grim picture, but he does it through stories laced with facts, both good and bad - as any good journalist does.

The only criticism I have of the book as a whole is that it’s one of those that you really have to be in the right mood to read – there were times I’d pick it up, read a few pages, and put it down because it just wasn’t gelling. And then there were other days where I couldn’t put it down.

So, I’d highly recommend this to anyone in the family (and outside of it), but maybe also have something a little more upbeat to jump to (like Stories About My Underpants!) when the going gets tough and Kwame Kilpatrick kills another prostitute.