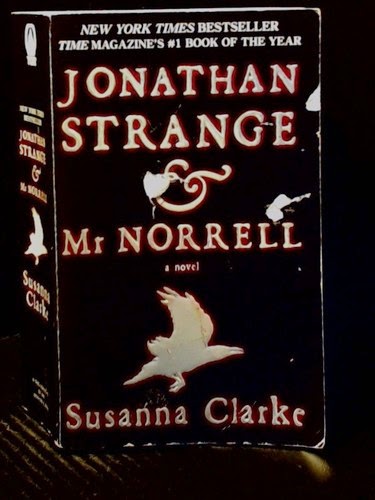 This may take a little longer than usual, possibly because the book is longer than most we've reviewed (846 pages) and because it is very good with flaws.

The concept is that magic was widely practiced in the British Isles in ancient times but had fallen into a mere academic study by the early 19th century.  Mr. Norrell, a recluse living in rural England, decides to reinvigorate English magic, but really wants to be the only English magician, thwarting all others from engaging in the practice.  He is successful in actually producing some pretty good magical outcomes, but is so hesitant to take on wide spread practical magic that it quickly becomes frustrating to both the characters in the book and to the reader.  A second man, Jonathan Strange, comes on the scene who seems to have a greater gift for magic but must use different means to learn the craft since Norrell has horded all the books.  Norrell uses the help of a Fairy to solve a difficult problem which introduces a great deal of difficulty to those who received the help, as well as those around them.  There you have well over the first 200 pages.

The book is suffused with the manners and mores of the gentry and nobility of that time and there's subtle satire throughout the book to that effect.  However, do not think this is Pride & Prejudice meets Harry Potter.  It is written in the style of P&P, with a leisurely telling of different social situations interspersed with real action.  There were those who wanted to start their own version of Hogwarts, but Norrel wouldn't let them.

When researching what others said about this book, there were many reviews ranging from 5 to 1 star, most in the upper range, and all the points were accurate.  Each chapter is well written and can stand alone but the arc of the plot is choppy and is less compelling until the middle.  From there, the book becomes more compelling because there are enough people to care about who need help, and there is enough magic to possibly resolve the issues, that the somewhat disjointed plot can be overlooked.  I found myself reading larger and larger portions of the book at each sitting.  The story does not conclude as much as it just ends, but at a satisfy point.  You sense that the characters will go on, but to what end is anyone's guess.

The sense of the disjointed, almost insane world that belongs to the Fairy kingdoms can be compared to those described in "The Book of Lost Things" by John Connolly.  Although I could not find it in scanning Connolly's book, I'm sure one of the stories within JS&N also appears there.  Since both authors are from the British Isles, perhaps it is a story known in British folk lore.  If you like "The Book of Lost Things" you probably will like this.  Ms. Clarke's story is highly inventive and clever and she is an excellent writer.  I'm not sure editing the story down a hundred pages or so would be right for this book, unlike each of the Potter books, but I had started this book years ago and put it down somewhere around the 200 page mark.  I'm glad I went past that point this time.  Of the family, only Amanda would be interested in this.
Posted by Dave at 8:40 AM

Definitely sounds like an Amanda/dad read - I have a feellng others will want to check it out, too!