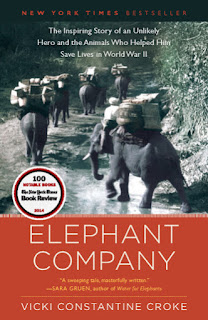 A Boston Globe blurb described this as "...blending biography, history and wildlife biology ... [in an] account of [Billy] Williams, who earned the sobriquet 'Elephant Bill' and his unusual bond with the largest land mammals on earth."

That's a good description of this interesting book, starting with a WWI veteran who went to Burma in 1920 to make his fortune.  He always had a strong attachment to animals and especially looked forward to the prospect of working with elephants.  The elephants were used to harvest teak in a reasonably sustainable fashion, which means clear cutting was not an option.  The various crews would take individual trees in a jungle setting, skid them using elephants to haul them through the jungle to dry creeks and river beds and wait for the monsoon rains to wash them down to areas where they could be rafted to saw mills.

The majority focus of the book is how strongly he bonded with these highly intelligent animals and how it eventually led to him using the elephants to rescue many people fleeing the Japanese takeover of Burma in WWII.  The book is at its best when describing the elephants, the environment, the actions of harvesting the teak and the interactions of the elephant handlers and the varied complex tasks the elephants accomplished.  The book also verged into what the elephants were thinking and feeling, especially in the presence of Billy Williams, and that may have been true, but went a bit overboard in attributing a sort of ESP between those involved.  Still, given some of the actions of the elephants, you can't really fault the author for ascribing almost mystical powers when describing these animals.

This is a very enjoyable story and a fun read.  Everyone in the family would like this book.
Posted by Dave at 8:23 AM