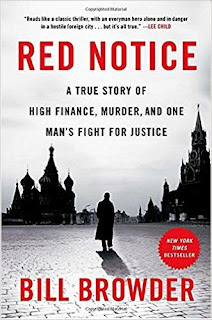 The author comes from a communist heritage (grandpa ran for the U.S. Presidency as the head of the Communist Party in 1936) but became wealthy by plunging into the wide-open stocks available in Eastern Europe and Russia after the disintegration of the USSR.  When one of the oligarchs, who snatched up the properties that were government- owned industries, manipulated the market to decrease the value of Mr Browder's holding, Mr. Putin stepped in on the side of Mr. Browder.  Mr. Browder figured Mr. Putin would make Russia a nation of laws. Sound like the guy we know?
Soon Mr. Browder's holdings were under attack by what appeared to be government-backed actions and his company eventually had to get out of Russia. One of his associates stayed (he thought the legal system was fair), was arrested, tortured, and eventually died.
If it sounds like the plot has been revealed and what's the reason for reading, this description doesn't do it justice.  The suspense and plot twists and turns are worth the reading. It is an interesting story, not just for the actions but also for the author's increased focus away from his business and toward justice for his brave associate.  A story we all should know.
Posted by Dave at 5:28 PM

I want to read this one!!