Playing To The Edge by Michael Hayden 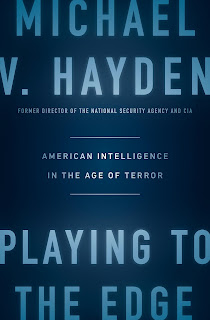 General Hayden is a past director of both the NSA and CIA while the country was undergoing changes in the intelligence community under presidents Bush 43 and Obama. In any self-written book by someone whose main occupation is not writing, there is apt to be a need for a good editor who truly understands the subject and who can guide the writer into satisfying revelations and stay away from minutiae.  This book is no exception.

His stated intent is to have a more open discussion about U.S. intelligence.  He was successful in talking more about our intelligence community than have some others in similar positions.  However,  nobody with any understanding of the dangers of a complete revelation of all things intelligence-related should ever get indepth when discussing methods and the general appropriately stayed on the safe side.  He also appeared to believe he was being fair in letting the chips fall where they may, yet some glaring omissions that a truly neutral author would have addressed (Cheney's outing of a CIA official as a vendetta for her husband telling the truth) and the politically-correct but technically incorrect taking of blame for the invasion of Iraq lessened the impact of some of his points.

In the end, the general did understand that there is a great distrust of our intelligence community and that is an unfair and unfortunate situation when that community is trying its best to defend the nation. The reason for that distrust is based partially on a lack of understanding of what they should do, a misunderstanding of what they actually do based on popular literary and media portrayals of agencies both real and imagined, and some past deeds that were truly wrong.  He does make suggestions on how to go forward to address how in a democracy an intelligence community can be both effective and still safely be guided by elected officials.  There probably is no perfect solution to this conundrum, but General Hayden addressed it enough near the end of the book to make it a worthwhile read for those interested in the subject.
Posted by Dave at 8:25 AM