The Road to Character by David Brooks 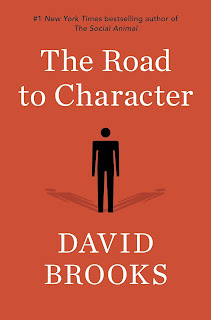 The New York Times columnist David Brooks has tackled a thorny subject by discussing character but has done a good job of getting the reader to understand what has characterized the term from antiquity to now. It has varied with time, yet those individuals he has highlighted have some commonalities, most notably a dawning awareness of personal shortcomings that must be addressed in order to live a better life.

Since none of us are fully self aware and "a better life" does not have the same meaning for everyone, Mr Brooks can not give us the approved solution for arriving at the goal.  He does give you some wonderful personal life stories of soldiers, philosophers, government and social workers and more that help him construct a possible path to a better character.  You might not like some of them, agree with their politics or philosophies, or find some of their choices to arrive at what they considered their better selves to be right for you, but the sum of the stories does support the idea that having good character requires an understanding of what you've been given (not earned), a humility that comes from that understanding and a decision to focus on others more that yourself.  Although he did not say it this way, it helps to try to always be part of the solution rather than part of the problem.

I liked the book and intend to go back and copy down some of the observations for future reflection.  They are that good.  As a side note, I learned about some historical characters I've heard of but only knew a sentence or two about them. In those cases, they made me want to learn more. In the case of St. Augustine, I read some of his writings and wish I could have just read Mr Brooks description and skipped the rest.  The book is not too long and well worth your time.
Posted by Dave at 8:06 AM