The Voyage by Philip Caputo 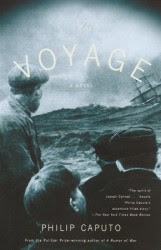 Could this picture be any bigger? Anyhow, thought I'd go big for my first post in a couple of years. Was going to try for funny, but Becky set the bar on that one for her first two, so I'll try my usual format and maybe stretch out with later posts.


"On a June morning in 1901, Cyrus Braithwaite orders his three sons to set sail from their Maine home aboard the family's forty-six-foot schooner and not return until September. Though confused and hurt by their father's cold-blooded actions, the three brothers soon rise to the occasion and embark on a breathtakingly perilous journey down the East Coast, headed for the Florida Keys. Almost one hundred years later, Cyrus's great-granddaughter Sybil sets out to uncover the events that transpired on the voyage. Her discoveries about the Braithwaite family and the America they lived in unfolds into a stunning tale of intrigue, murder, lies and deceit."


I copied that last paragraph from the Random House website. Couldn't have done better, so let's call this the sincerest form of flattery. About the book, I really liked it. The initial start with the great-granddaughter looking into a mystery was kind of clunky, but once the tale was fully enveloped with the three boys and the ship, it was as good as sea stories and coming of age stories get. The mystery is good, the clues make sense when presented, and all of the scenes of storms, animal or human attacks, and family dynamics really work. I had to put the book down a couple of times and mentally catch my breath after a few of those scenes. Caputo is a wonderfully clear and descriptive writer without being verbose. I know all the not-retired folks have time constraints, but this is writing at its best and worth the time.

Sounds good! I think I'm going to recommend this one to Ian, actually. Haha, go big or go home with that picture, right? I'm so glad we're blogging again, thanks for sharing this, dad!